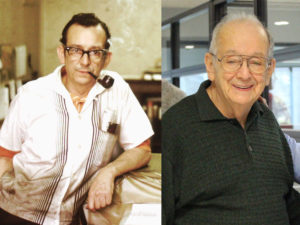 Atlantic Ultraviolet Corporation’s Vice President Tom Dituro, Sr. is believed to be the Most Experienced Person in Ultraviolet Industry.

Atlantic Ultraviolet Corporation’s (AUV) Vice President Tom Dituro, Sr. will turn 90 years old in January 2018 and is believed to be the most experienced person in the ultraviolet industry. Dituro began working for Atlantic Ultraviolet Company in 1950 as a field service technician and sheet metal mechanic. As an entrepreneur and innovator, in 1963 he and a business partner purchased the struggling company, renaming it Atlantic Ultraviolet Corporation ®. They secured its success by expanding its development and manufacturing capabilities. Dituro has been a part of significant shifts in technological advancements in products and manufacturing. After 67 years in the ultraviolet business, he still regularly reports to the factory.

Thomas Dituro, Sr. was born January, 1928 and raised in Long Island City, Queens, NY On April 1, 1946, at age 18 he entered the United States Army. Stationed in the Philippines for two years, Dituro’s primary job was to guard Japanese Prisoners of War. Following the war, Dituro took full advantage of the 52-20 Club, a G.I. Bill clause that enabled returning unemployed service men to collect $20 per week for 52 weeks while they looked for work. When it ended, he decided he wanted to work for himself. He purchased a 6 x 6 truck and made local pick-up and deliveries from various companies but mechanical issues brought this venture to an end.

A German neighbor trained Dituro in woodworking techniques and he worked for this neighbor assisting in making kitchen furniture. After the workshop burned down, he worked with his brother in construction, and was involved in the building of Saddle Rock home development in Great Neck, NY. As a man of approximately 125 lbs, he quickly acknowledged that although this work provided financial security, he was not physically suited for construction.

Dituro then became partners with a friend peddling t-shirts and socks door-to-door that they would purchase wholesale in downtown NYC. This business venture was not lucrative although they were able to keep their heads above water.  When this partner became ill, Dituro needed a new job. In 1950 he was then hired at Atlantic Ultraviolet Company as a field service technician and sheet metal mechanic.

As AUV continued to grow, so did the need for space.  AUV relocated to Bay Shore, New York in 1975 into a brand new, 5,000 square foot building which would eventually be expanded to 8,000 square feet, the maximum space allowed. Then, in 1994 AUV moved again to a custom built 37,500 sq. ft. office and manufacturing facility in Hauppauge, New York. With his 90th birthday approaching in January 2018, Tom Dituro, Sr., Atlantic Ultraviolet Corporation Vice President, can be found in the Hauppauge, NY facility where AUV continues to innovate and manufacture ultraviolet lamps and both air and water disinfection equipment.

In 1963, Atlantic Ultraviolet Corporation ® began engineering and manufacturing ultraviolet water purification equipment, ultraviolet air sanitization and surface disinfection systems, and germicidal UV lamps for residential, commercial, and industrial applications. They continue to engineer and manufacture their products in the USA.

Germicidal ultraviolet lamps used in Atlantic Ultraviolet’s products produce short wave radiation that is lethal to bacteria, virus, and other microorganisms. Well established as a method of choice, ultraviolet technology is effective, economical, safe, quick, and easy to use due to its by-product free process. The method is unique without the use heat or chemicals.

I am Atlantic Ultraviolet's corporate communication representative; my daily tasks include presenting and distributing valuable research, engineering, sales and marketing content in the area of applied ultraviolet technologies.

Sign up for news, tips and deals from Atlantic Ultraviolet Corporation

Made in the USA